Minke whales are beautifully streamlined, with a sharply pointed snout and long tapering tail. Whales (as well as other marine mammals such as dolphins, seals and dugongs) have a thick layer of insulating fat (the blubber) which can also act as a food reserve and a source of water.

The upper jaw is flattened, with a central ridge that runs from the tip of the snout to the double blowholes; this ridge often reflects sunlight and glistens when the whale breaks the surface to breathe. 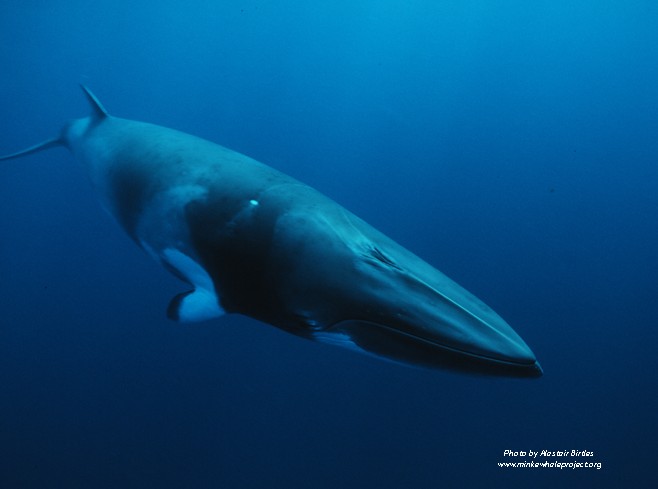 Figure 1: The sharp pointed snout of a dwarf minke whale.

The nose of a whale is on the top of the head. There are two nostrils which are tightly closed when the whale is underwater and appear as two slits forming a forward pointing V. When the whale surfaces, it breathes out quickly and forcefully. In colder climates, moisture in the breath condenses to form a distinct ‘spout’ or ‘blow’, which in the distance can look like a column of water. The nostrils in whales have generally been called the ‘blowholes’. The warmer waters of the Great Barrier Reef mean that a blow is rarely seen although moisture on the blowhole can occasionally form an indistinct rounded “blow”. 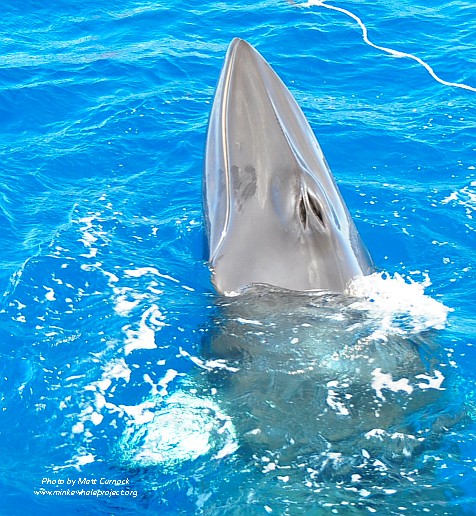 Figure 2: Like all baleen whales, minkes have two blowholes.

The eyes are relatively small, located just behind the mouth and are protruding slightly, facing sideways. Thus they provide a larger field of view to the animal and they can be moved independently. They would usually provide a different field of view however they can swivel their eyes up and downwards, almost certainly providing good binocular vision forwards, above and below them (Birtles & Mangott, 2011).

Figure 3: Eye and ear of a dwarf minke whale.

The ears appear as tiny pits behind the eyes. The earbones, which receive sound, are buried deep within the body at the base of the skull. It is thought that baleen whales are capable of receiving low frequency (compared to our own hearing) sounds. Such low frequency sounds can travel long distances underwater and may allow communication between distant groups of whales. They are not useful for fine scale echolocation, as utilised by dolphins and other toothed whales, but might allow the whales to pick up large objects (e.g. reefs).

The flippers or pectoral fins correspond to our hands, and contain the same bones. Flippers are used to manoeuvre. They are extended just before the whale surfaces and may act like the dive planes of submarines. As a whale rolls or spins, one flipper is extended, while the other remains close to the body. 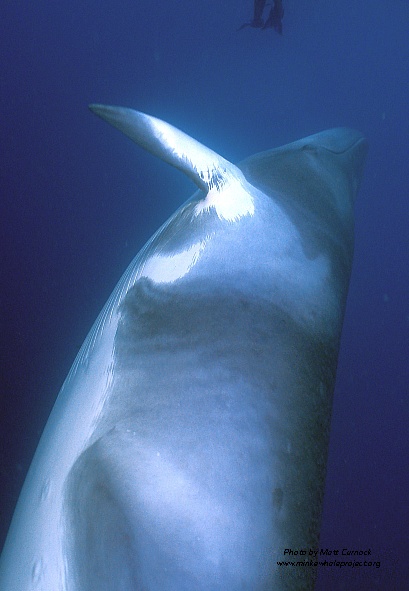 The back or dorsal fin of the dwarf minke whale is about the same size as a bottlenose dolphin’s fin but it is set further back on the body. Sometimes, when the whale is in the distance, the position of the fin is the best way to tell a dwarf minke whale from a large dolphin. 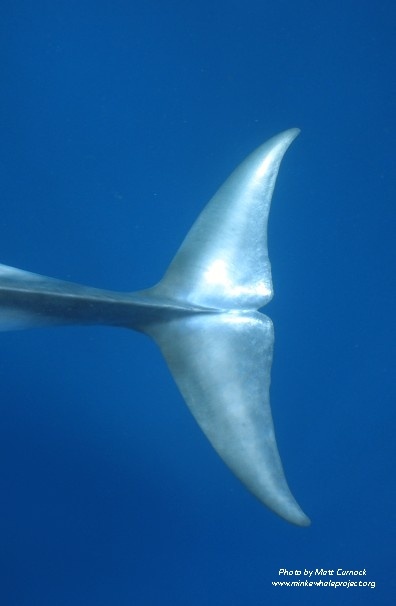 There are 55 to 75 grooves which run along the throat on to the belly, for approximately one-third of the whale’s body length. These grooves allow great expansion of the throat which enables whales such as the minke to engulf a very large volume of water and food. When the minkes are swimming normally, the throat muscles are contracted and the head shape is streamlined. The grooves are obvious only if the whale turns to expose its belly. 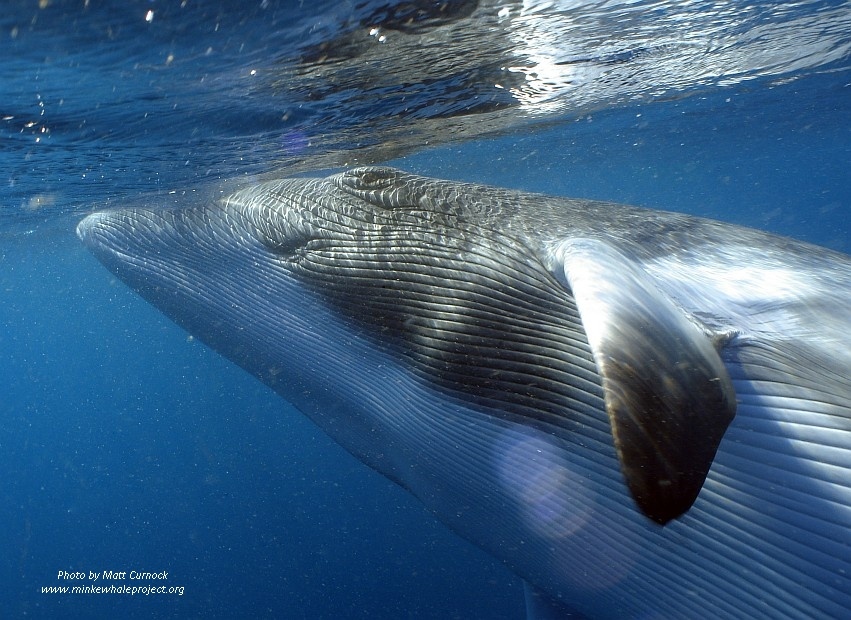 Figure 7: Whale rolling and displaying throat grooves. Note the old, healed scar on the throat beneath the eye – this was probably caused by a cookie cutter shark.

Baleen plates grow from the roof of the mouth; there are 200-300 plates along each side of the upper jaw of dwarf minke whales. Most of the plate is smooth and hard, like our fingernails, but the inner edge of each plate has a fringe of coarse bristles.

Minke whales, like other members of their family, are gulp feeders. Their finely grooved throat can expand like a balloon to enclose an enormous volume of water and densely packed fishes or krill (small shrimp-like creatures which occur in enormous schools). When the throat is compressed back to its original shape, water is forced out between the baleen plates but food is trapped by the fringe of bristles.

Right whales are not gulpers. They swim through concentrations of food, continuously filtering through their very long (up to 4 metres) baleen plates. 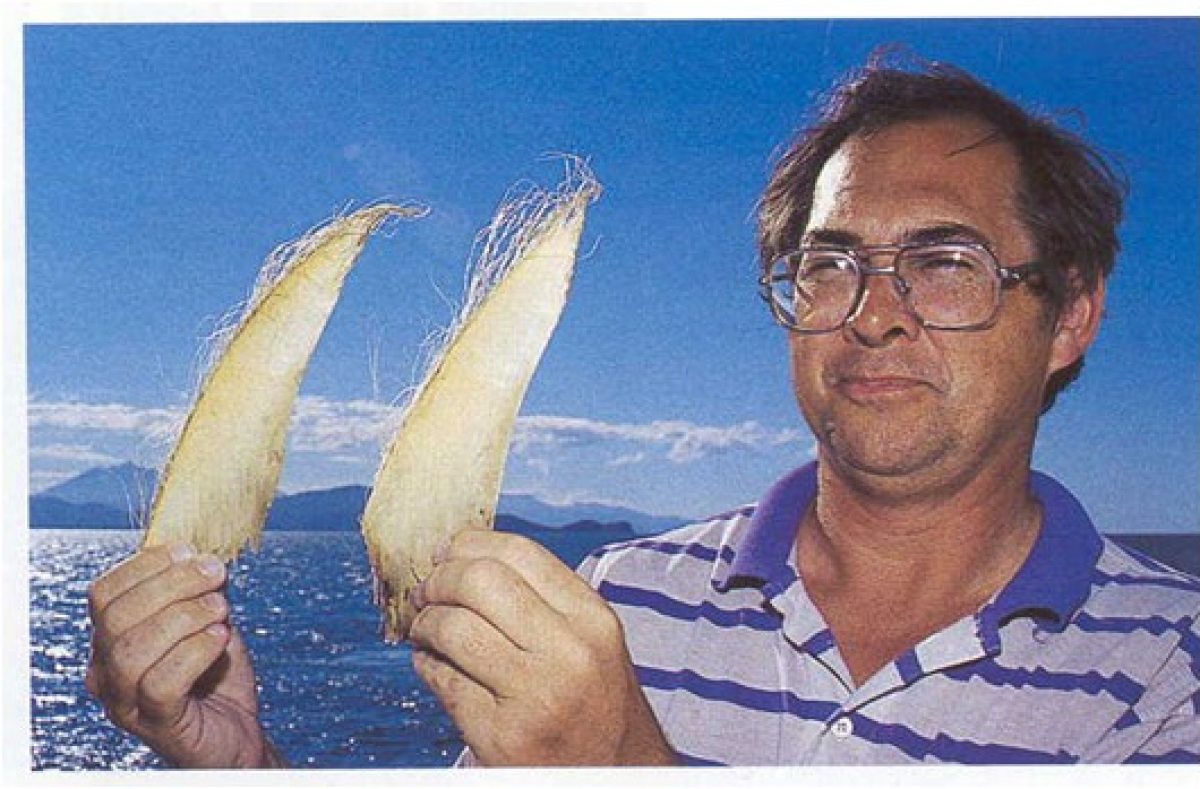 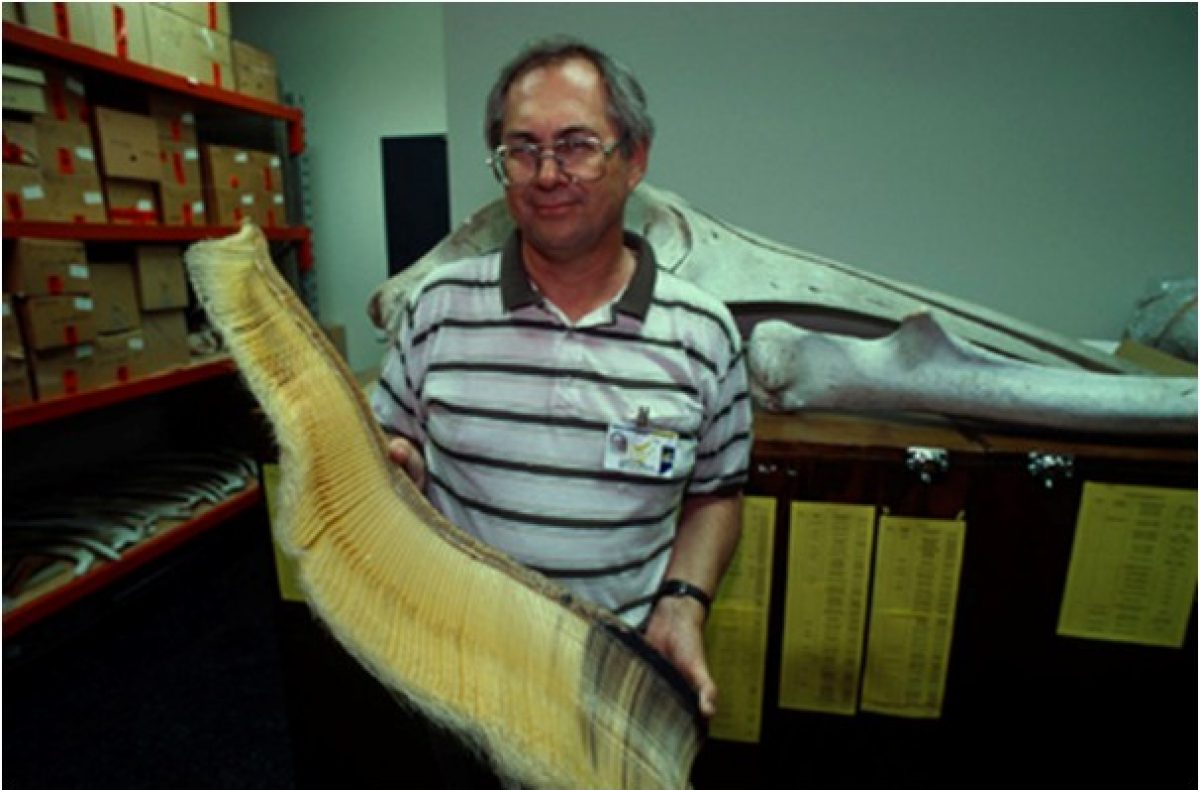 Figures 8 & 9: Baleen plates from a dwarf minke whale, held by the late Dr Peter Arnold. These specimens are from a whale that stranded and died of natural causes in the 1980s. The skeleton and baleen plates are stored at the Museum of Tropical Queensland in Townsville. 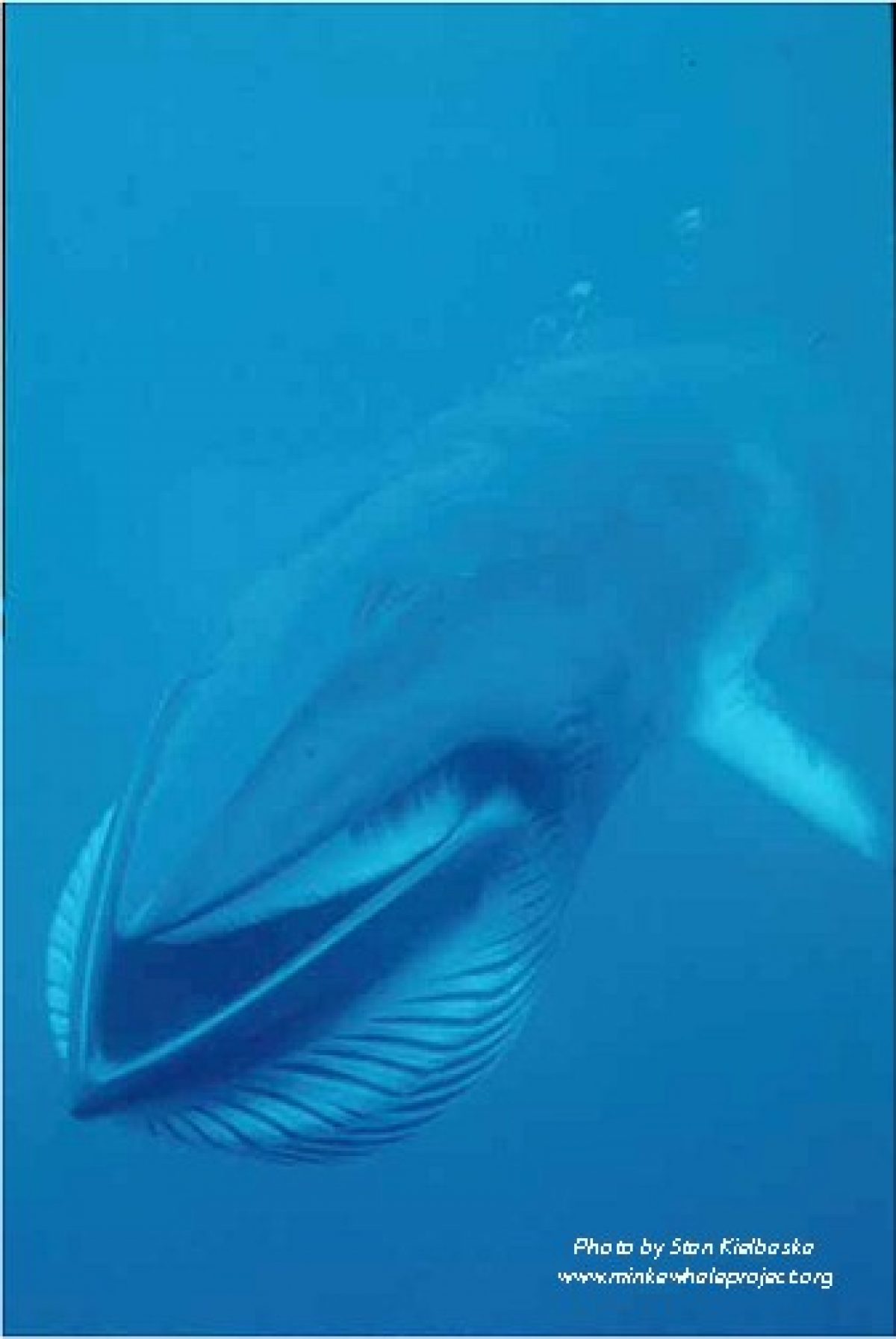 Figure 10: A dwarf minke whale showing its baleen plates in a gulping display. Such behavioural displays are rare. (Image courtesy of Stan Kielbaska.) 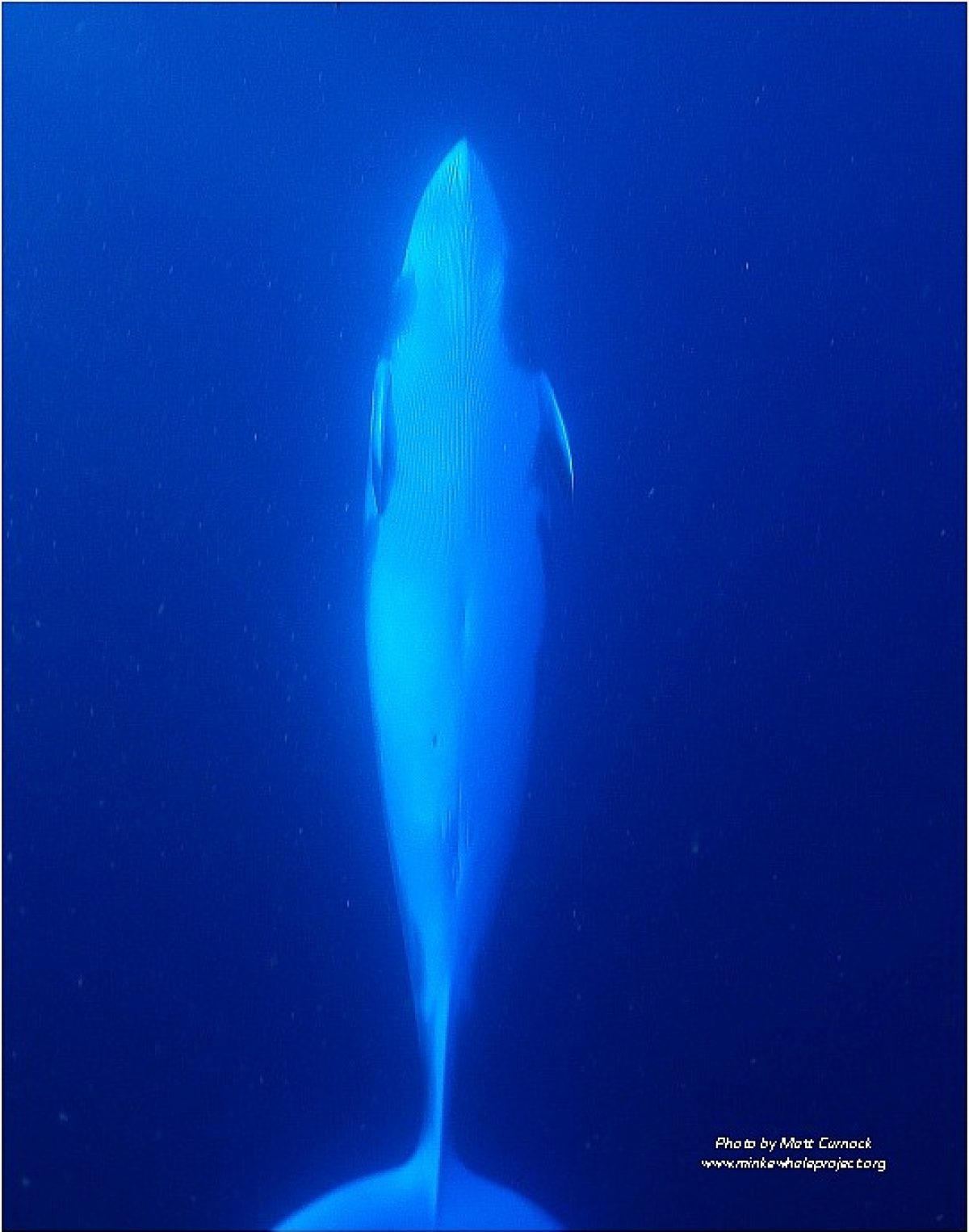 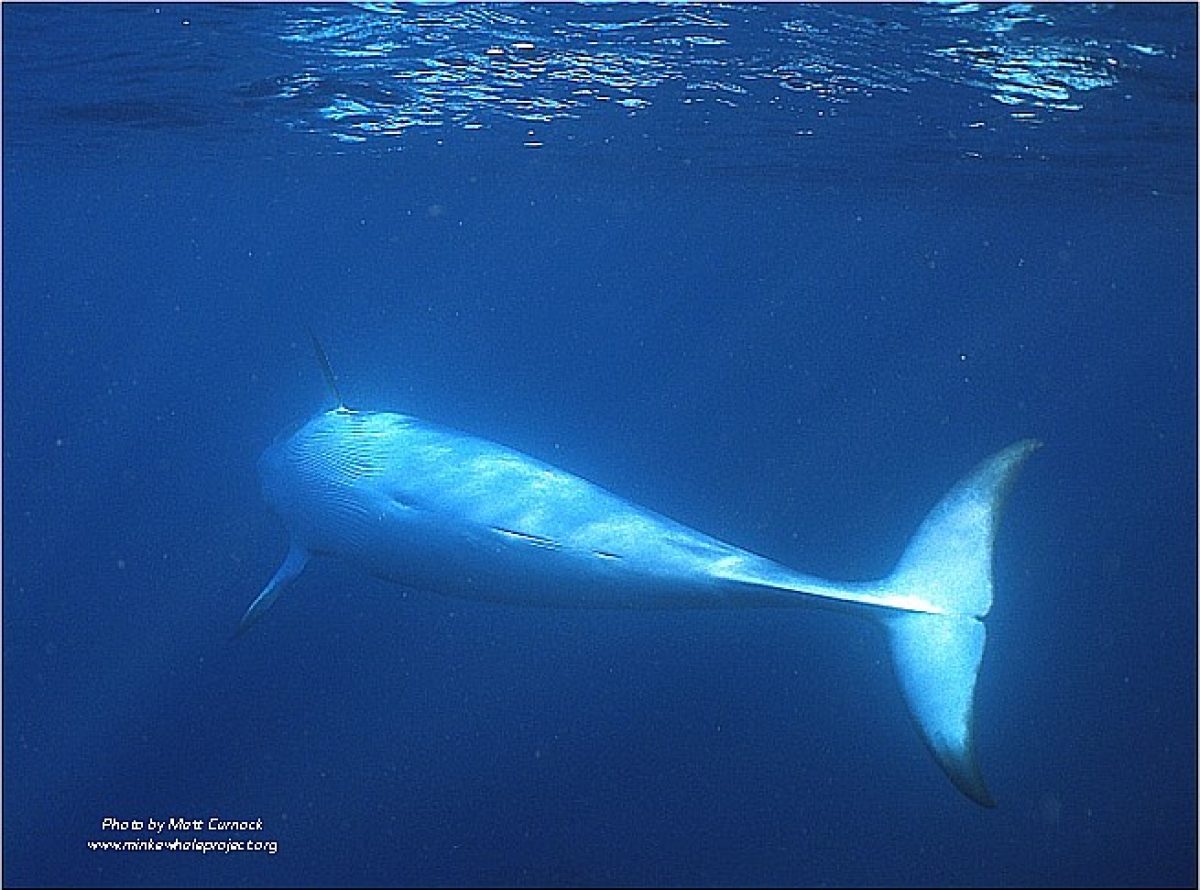 As with other baleen whales, the female dwarf minke whale is probably larger than the male. The longest female measured was 7.8m long while the longest male was 7.1m long (Best, 1985).